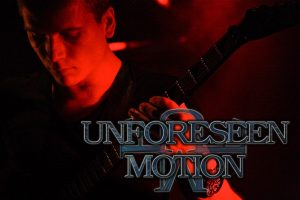 In 2011 the EP Breaking the Glass Armor was produced and digitally released by Layered Reality Productions. The EP was positive received and reviewed.

Inspiration:
Unforeseen Motion is an instrumental project. The main reason is my love for film music. Film music is often instrumental. Telling a story without words is a challenge. I combine my two favourite music genres: film music and metal. Progressive is a word that can be applied on my project in multiple ways. If I would have to, I would call Unforeseen Motion ‘Epic Progressive Metal’ but I’m not a fan of labeling music myself. Last but not least: My taste and style changed over the years. It is not unlikely that future songs will have vocals or a different sound perhaps.